We're back and I didn't drown!!

Carla Hoff of Cactus Quilts asked me to teach a workshop on a quilt cruise she was hosting.  I must admit, the thought scared me!  I have always said I would never get on a ship.  I can't swim and just the thought of being on a ship in the middle of the ocean made my stomach turn!  But, never say never!  You see, I just love Carla, so how could I not agree?  So, that is how I found myself on my way to Galveston with Gary, Michelle and Stephen to board a ship to the Bahamas.

What a trip my first cruise was!  We stayed overnight in Galveston and got up bright and early the next morning to have our luggage down so it could be taken to the ship.  We woke up to an announcement that the ship could not dock due to fog, so we would be delayed a couple of hours.  We took our luggage down and the hotel allowed us to stay in the room and rest.  At noon, we were told there was still fog, so we ate a light lunch at the hotel and went back to our room to nap.  Finally, at 4:45 that afternoon, we were on our way to the ship.

Once we went through security and got into the terminal, we were told we were still fogged in and the ship was still not docked.  Expect to board at 7:30.  I'll spare you all of the announcements by just telling you we finally boarded at 11:45 that night!  Now, you would think being stuck in a terminal would be boring, but we were seated in a row that was determined to have fun!  There was a fellow passenger who kept us entertained with jokes and stories - we were in tears at times laughing so hard.  Of course, with Stephen there he had found an accomplice!  Between the two of them, there was not a dull moment.  Just when you thought they would run out of shenanigans, the man pulled out balloons, blew them up and everyone in the terminal started bopping balloons to each other.

We ate dinner at midnight, had our safety drill at 1:30 in the morning and were then told we were too fogged in to leave.  We were finally on our way the next morning!

What a great time we had!  Carla did a wonderful job (this was her first cruise too) and everyone had a ball!  I designed a new quilt pattern for the cruise and we had three classes full of quilters busy completing what will become our newest pattern at Fall Market this year.

We've got a lot of pictures to share...but you'll have to wait until Fall to see the quilts! 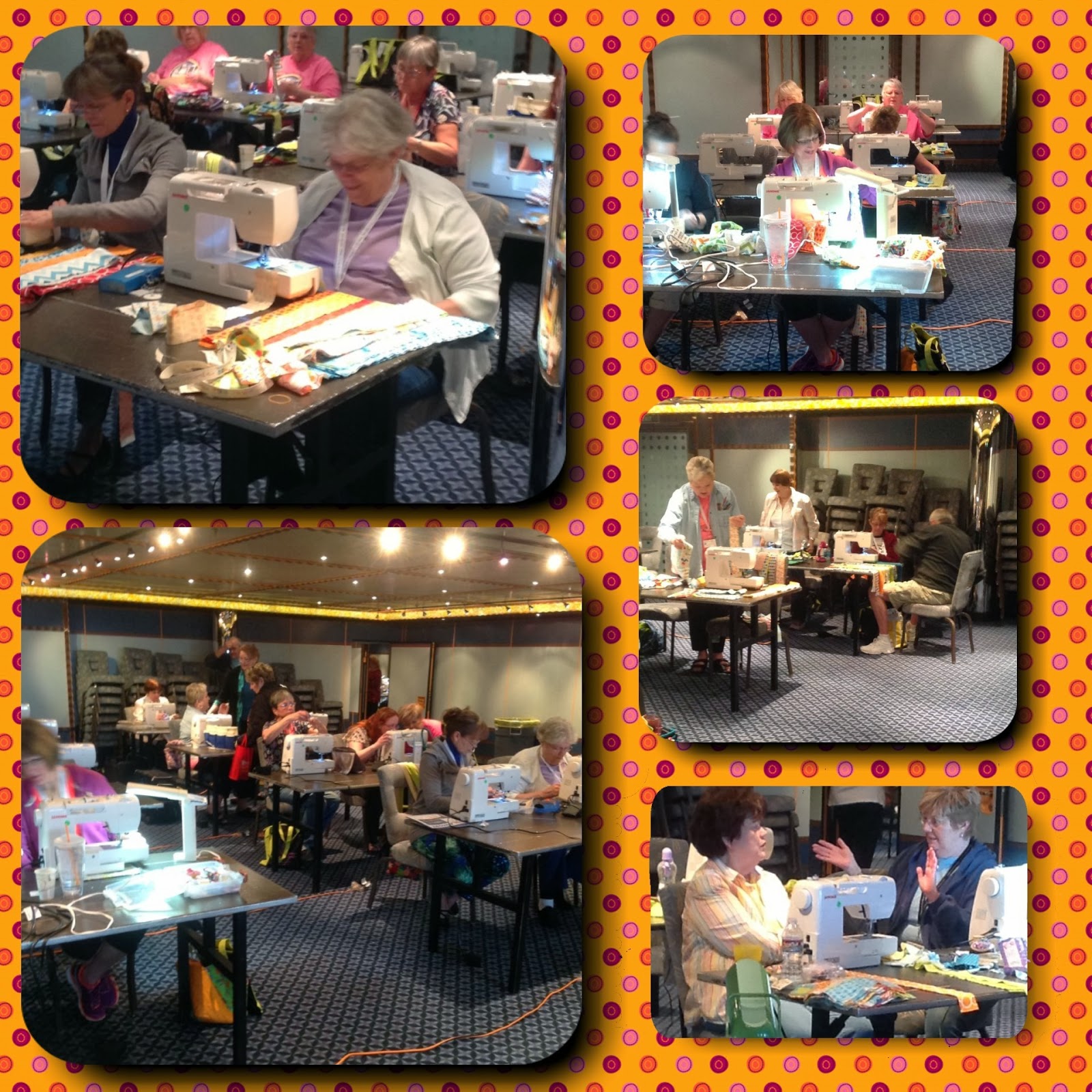 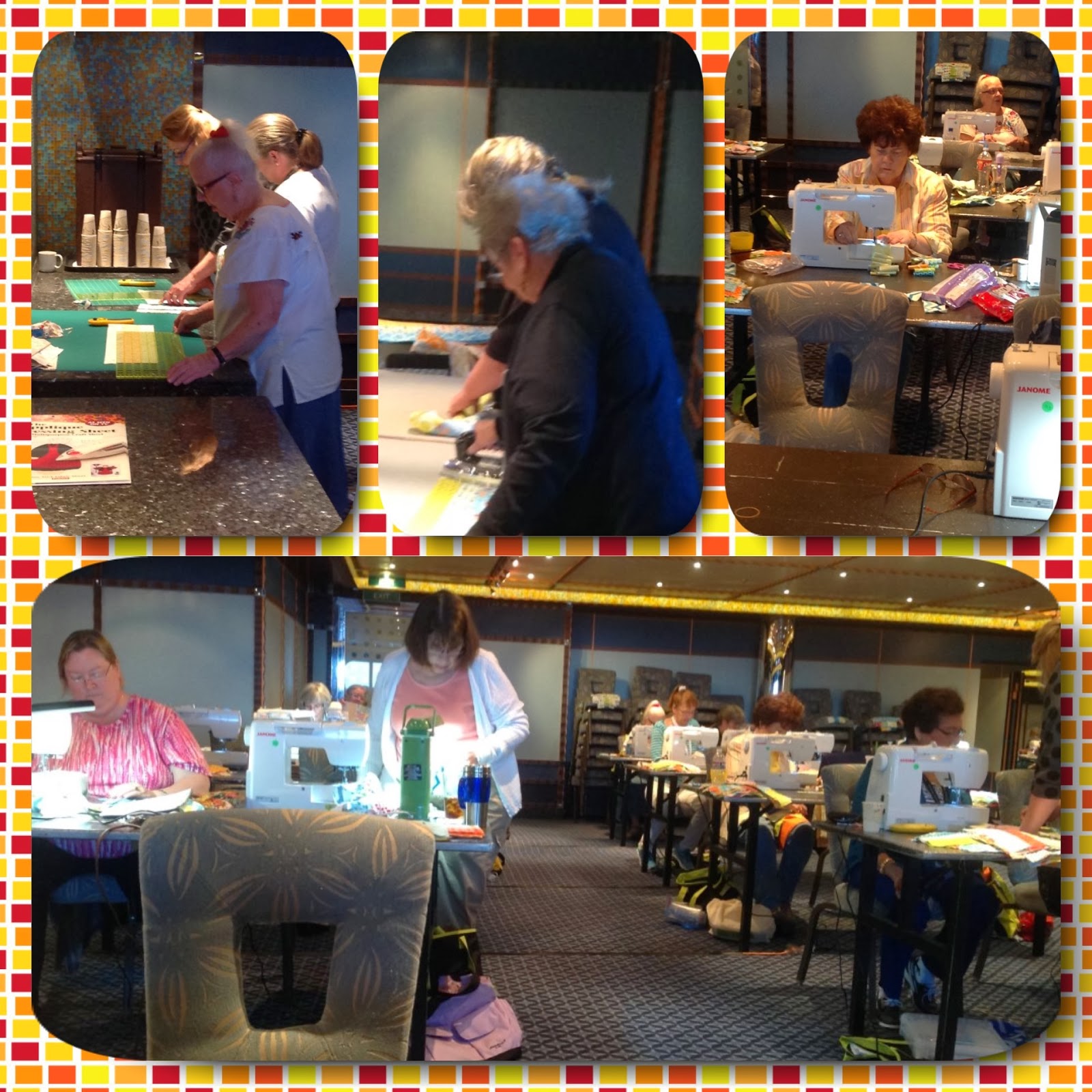 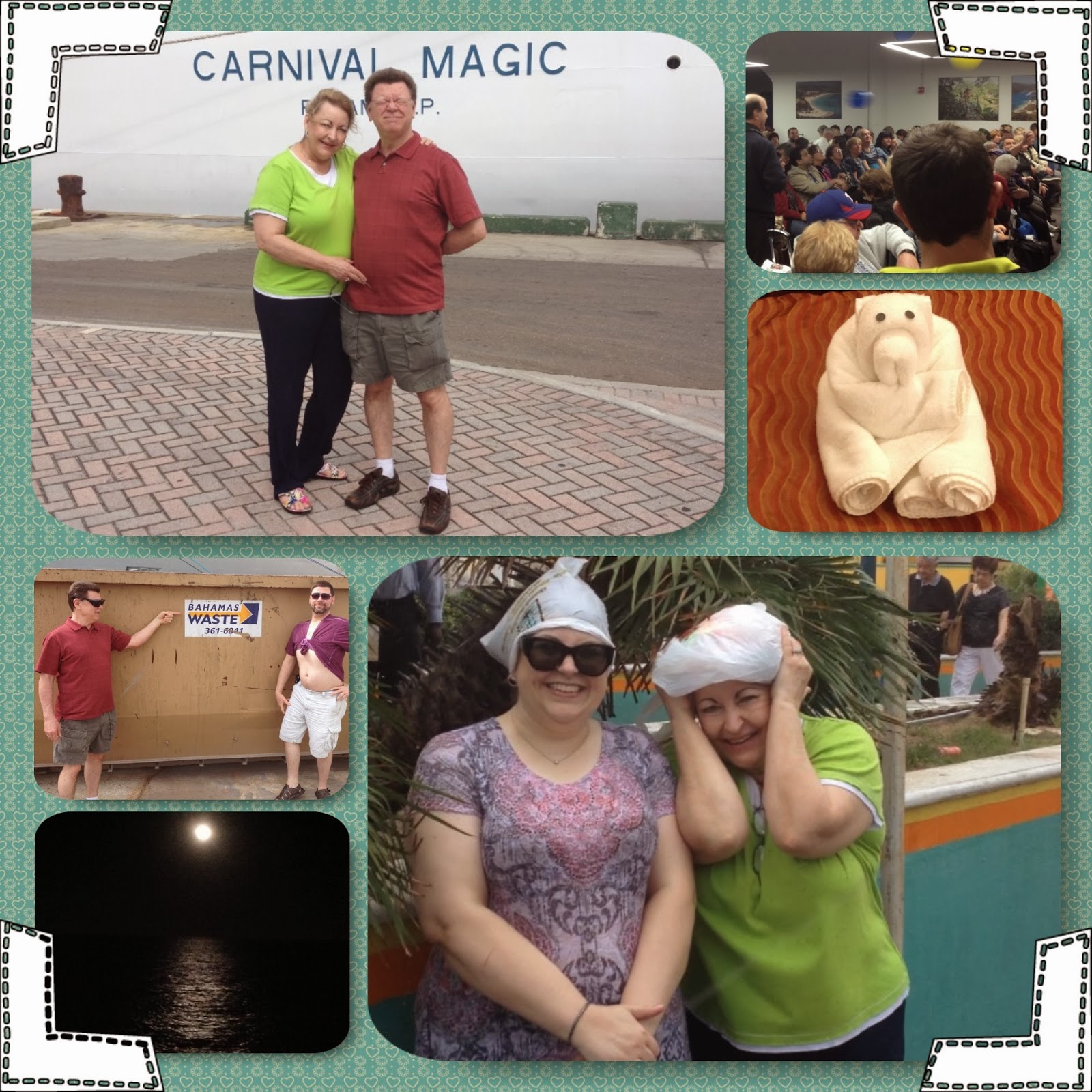 Now, there are some stories to go along with the pictures above.  Top left is Gary and me.  Michelle took the picture.  You can tell the sun was shining...even on the screen of her iPad, she could not tell her Daddy was squinting!  :)
Top right was taken in the terminal - bopping balloons.  Below that is one of our little towel animals.  I loved seeing what we would get each night.  Our cabin steward was wonderful!  Middle left is our goofy son-in-law, Stephen. posing by the trash can.  Gary is pointing out that it says "Bahamas Waste"!  Right below that is a picture taken from the balcony of our room of the moon rising above the ocean.  Bottom right is Michelle and me - Bag Ladies!  It had started raining as we were heading back to the ship and bags were all we had.  (We had been shopping!) 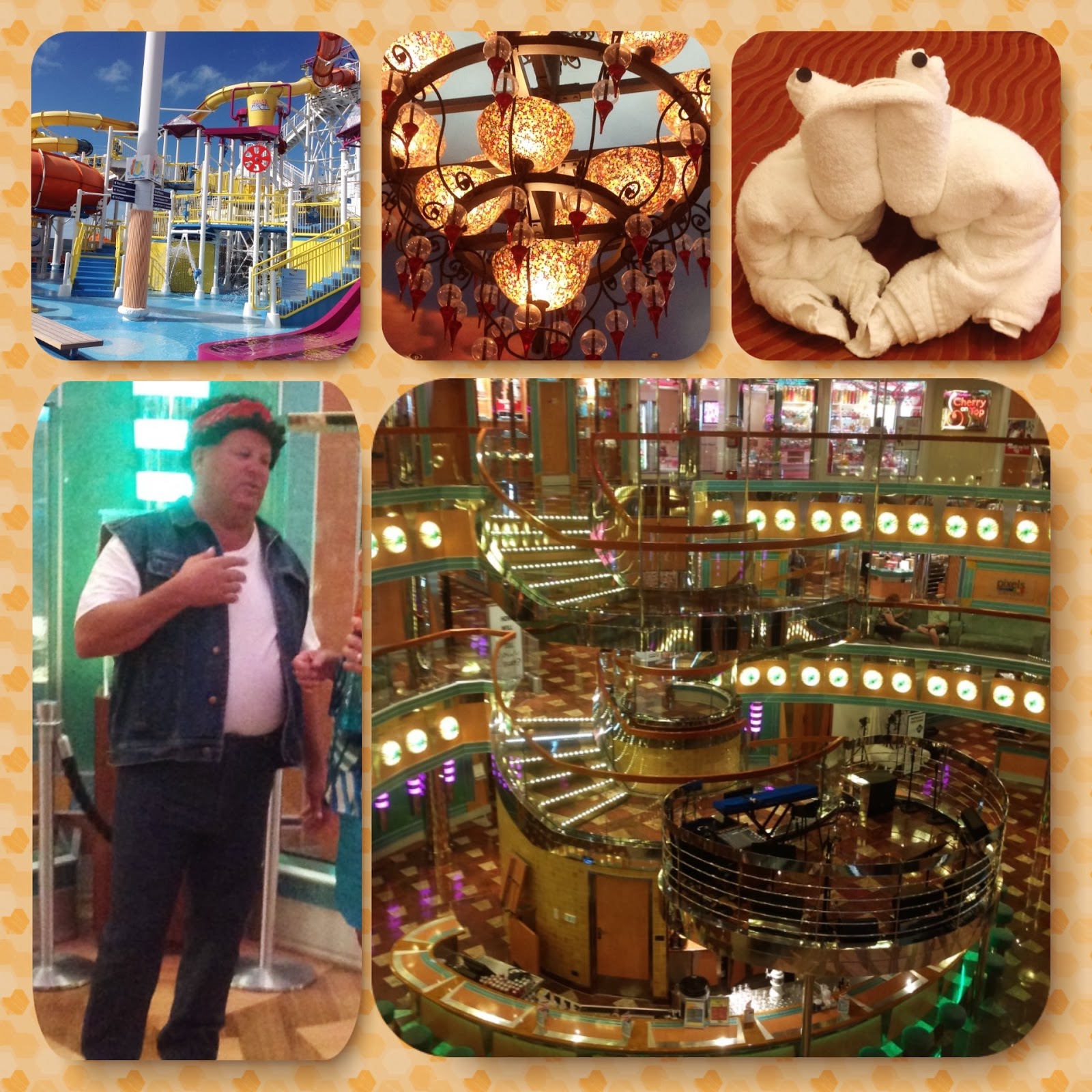 Just some pictures of the ship.  See the guy on the bottom left?  Funny story!  The final night of the cruise, they had a Carnival Legends show.  Passengers had tried out earlier in the week to sing on stage as a popular artist (Garth Brooks, Cher, etc).  This man came out and sang "Born To Be Wild".  Guess who it was?  The man from the terminal!!!  We began our trip being entertained by him and we ended our trip the same way.  Had to get a picture of him!

Now we are back in the office preparing for the Dallas Quilt Show, but a little piece of me is still floating and quilting on the ocean.

Thank you Carla, Cactus Quilts and all the wonderful quilters for making my first cruise such a memorable time! 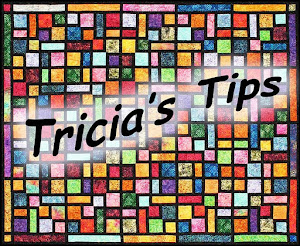 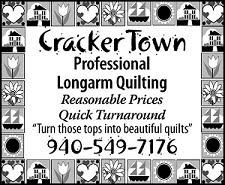